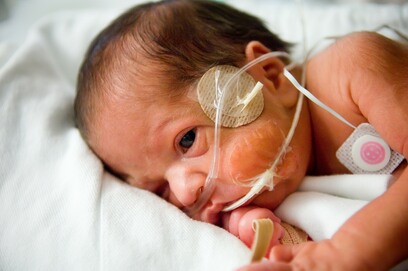 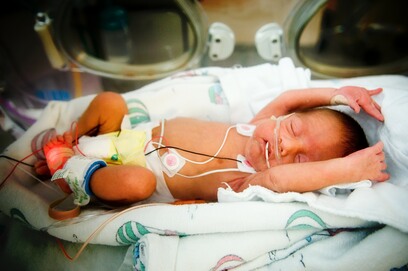 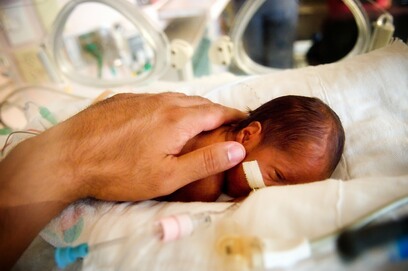 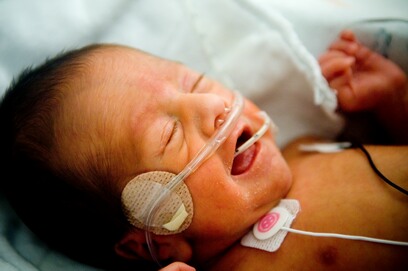 Please pray for Aiden. Over the weekend, he suddenly began to have difficulty with his lungs not oxygenating properly. The doctors increased his ventilator settings several times without results, so decided to put him on an oscillator, which is a high-frequency ventilator.

He has stabilized with use of the oscillator, which is helping his lungs to oxygenate, but now the doctors need to identify the cause of the problem. He has had 5 different doctors in the last 5 days, each of whom have different theories as to what is causing the problem and have differed in their opinions as to timing and how to proceed. All of them, however, agree to the extent that it is likely somehow related to the CAM mass that was in his lungs. Some of them believe that the CAM may still be present and simply not showing up on the x-rays. The others believe that while the CAM has probably resolved, the cause of the problem is related to it having previously been present (i.e., the lung did not develop properly because of the CAM growth).

They have told us that their is no way to prove any of these things or verify these theories without having a CT scan. They attempted a CT scan on Friday when the problem first became apparent, but it did not take. Since Aiden is now on an oscillator, they cannot perform a CT scan until he is off of the oscillator. Also, each CT scan exposes him to extremely high levels of radiation (50-250 times the average xray, even for an adult), which is not good for a premature infant and can have long-term implications.

Please pray that the Lord will heal his body and whatever is causing this problem, and will give him the right nurses and doctors. He has not had the same nurse for more than 2 days in a row since he was admitted, and the doctors seem to change on a daily basis, so he has not had any continuity of care. When the babies were born and up until Friday, he was the most active and lively of the three. He had his eyes open and was looking around, and he recognized Mom and Dad’s voices. Since this weekend, there has definitely been a change — he has become lethargic and somewhat non-responsive. We know God can take care of this problem and resolve whatever is causing it, and we appreciate your prayers for little Aiden.

On a positive note, Ethan and Evan are doing very well. Ethan is growing and is tolerating his feedings very well — he is up to nearly half an ounce every three hours! He is off of the CPAP (the longer nasal prongs with a higher pressure air)and has graduated to the adult-style, shorter nasal canula. Mom and Dad have both been able to hold him for short periods over the last couple of days, which has been exciting (pictures to follow later)!

Evan was experiencing a lot of bradys (bradycardia) due to irritation from the CPAP, so over the weekend the doctors took him off of the CPAP and put him on a diffent type of ventilator to give him a rest. He is still mainly breathing on his own, however, this ventilator will not allow him to *not* take a breath. With the new ventilator he has not had any bradys, so that is encouraging! Since he is doing so well, they will likely move him to a nasal canula soon as well. They had started feeding him on Friday, but had to stop for a couple of days because he was not tolerating it very well. Beginning yesterday, they have slowly restarted and increased his feedings and he seems to be tolerating it better this time. Please pray that Ethan and Evan will continue to do well! Manish and Baby Ethan spending some quality time together Having triplets is already very tiring!

Thank you so much for your continued prayers! The babies are doing well.

On Wednesday, the doctors performed echocardiograms on all three babies to see if the Indocin had been effective in closing the heart murmers. Ethan’s murmer seems to have completely closed, which is fantastic! There is a possibility that it could re-open later, so please pray that it will stay closed. Although the Indocin did shrink the size of Evan and Aiden’s murmurs, it did not completely close them. Evan’s murmur is now very small and he does not seem to be experiencing any symptoms from it, so the doctors have decided to wait and see if it will close on its own. Aiden’s is still medium in size, so they started him on another dose of Indocin beginning Wednesday afternoon. They will perform a repeat echocardiogram on Aiden tomorrow (Friday) morning to see if the second dose of Indocin has been effective. Please pray that Evan’s murmur will resolve on its own and that Aiden’s will be completely closed, with no ill side effects from the medication.

Ethan and Evan are still off the ventilators and continue to breathe mostly room air, with only a low dose of oxygen from a nasal canula. They both started feedings today, and seem to be tolerating it well, which is a big step! Aiden’s jaundice levels have gone back up, so they had to restart the light.

The brain scans were performed on Wednesday afternoon. Evan is fine and shows no intracranial bleeding, but Ethan and Aiden both have small brain bleeds (Grade 1 on a scale of 1-4). There is no medication or anything that can be done for this. They will repeat the brain scans on both babies next Wednesday to reassess. Grade 1 is the lowest level brain bleed and typically has no long-lasting effects. However, there is always a slim chance it could become worse. Please pray that these brain bleeds will resolve on their own and that Ethan and Aiden will not have any lasting side effects from it.

Other than that, all is well thus far. Thanks for your prayers!

Click the video below to watch the three boys do all things from squirm, sneeze, yawn and make such cute little baby noises!

After much delay and discussion, we have finally come up with names for all three boys.

Ages
Ethan is the oldest, Aiden is the youngest and Evan is the middle child.

Now, try saying “Ethan, Evan, Aiden” as fast as you can. Difficult, isn’t it? When they misbehave and we yell at them it will create quite a challenge!