Since Aiden has no appointments for over a week, he and Hannah are going to upstate New York to stay with Manish’s parents. Aiden will love having all that room to run around and seeing his beloved Papa, Grandma and Amisha! Here is an image of him first thing in the morning. 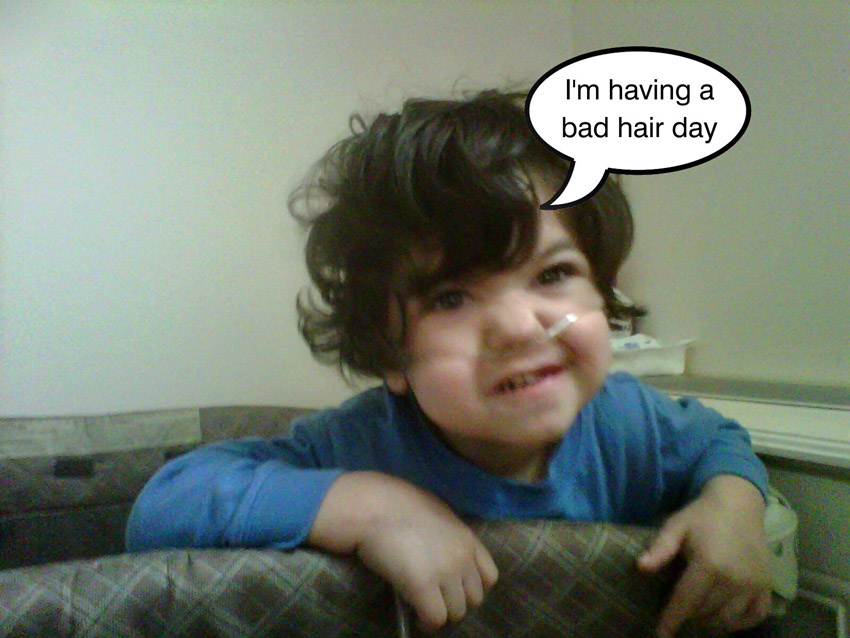 Imagine waking up to this every morning

As expected, the endoscopy and colonoscopy showed nothing. Were are waiting for the results on the manomatry and biopsies but don’t expect anything to be found.

The twins have been sick all week with a fever, coughing and runny nose. After anti-biotics and a host of other medicines they are feeling much better. They were restless in their cribs so they got to sleep in Daddy’s room for a couple of nights. Unfortunately, this can create some bad habits and they wanted to make that their new bed even when they felt better.

Their new thing is wearing Manish’s sneakers and shoes. They love putting them on and running all over the place with them. On more than one occasion, he has been unable to find a matching shoe!

Below is a video of Aiden singing and some pictures of the twins. 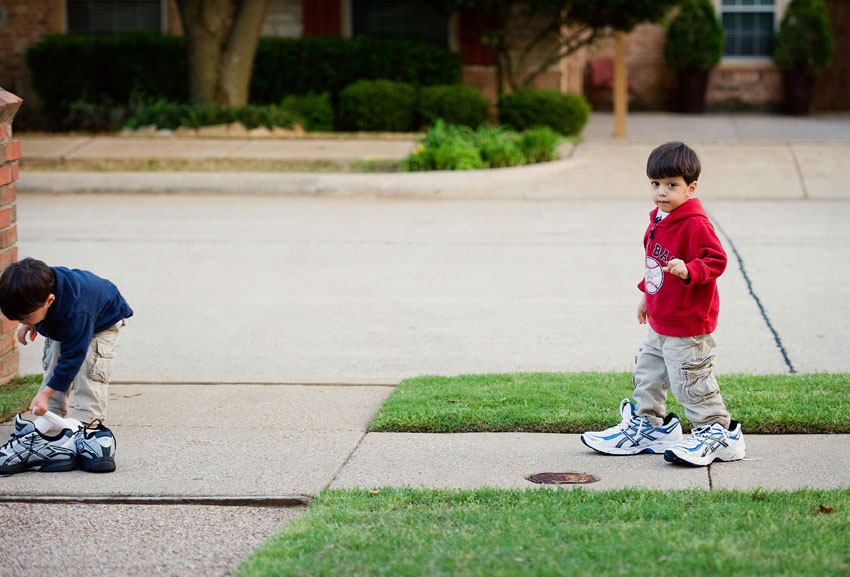 Who stole my sneakers? 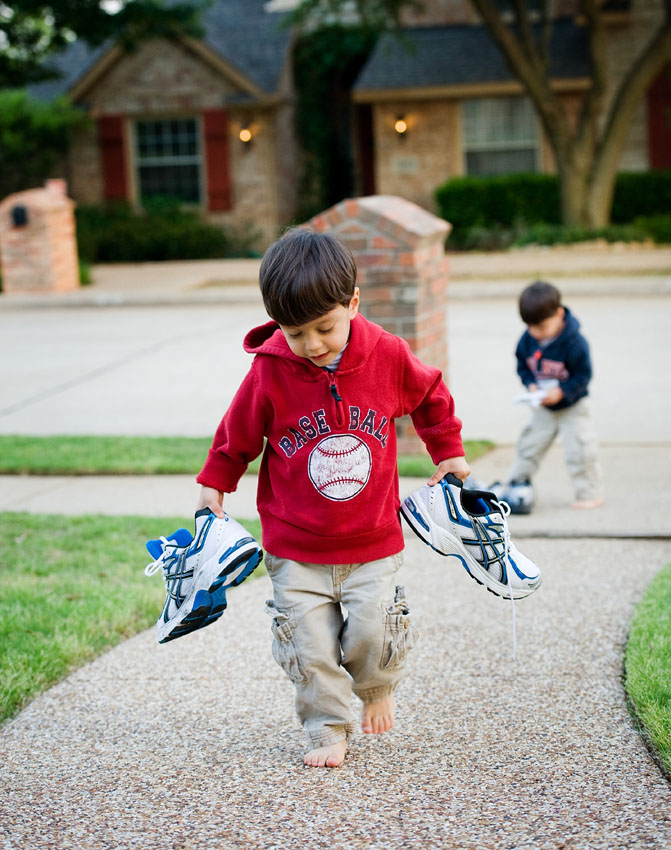 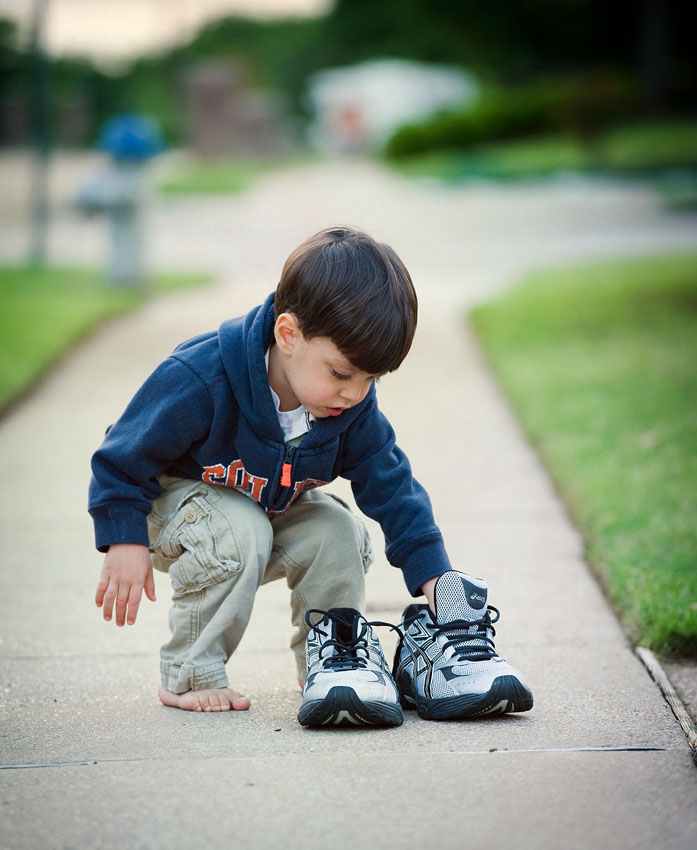 And this one has my other pair of sneakers 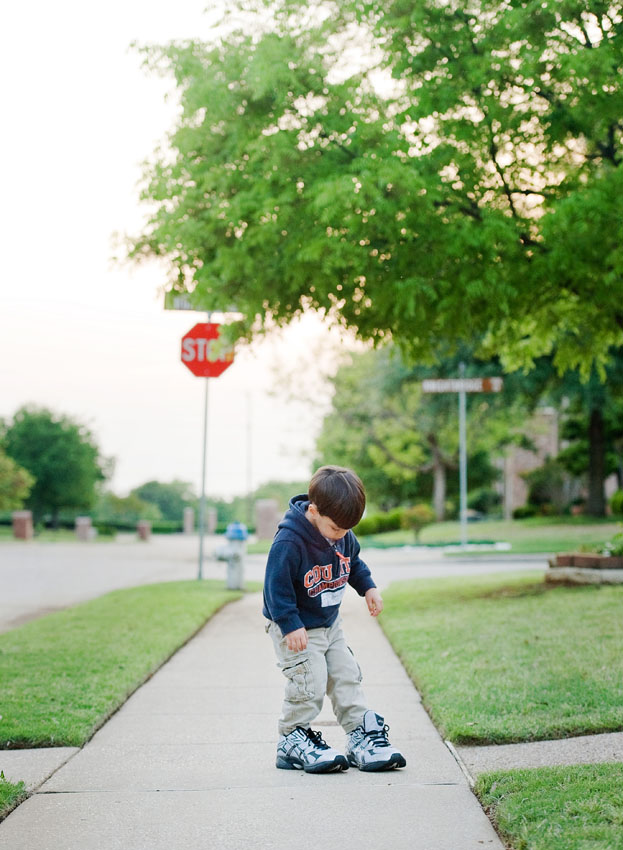 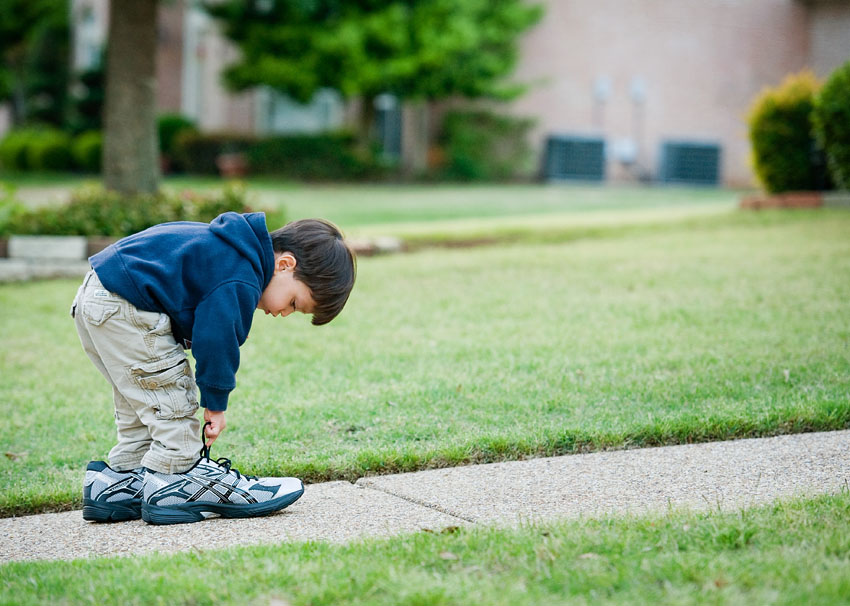 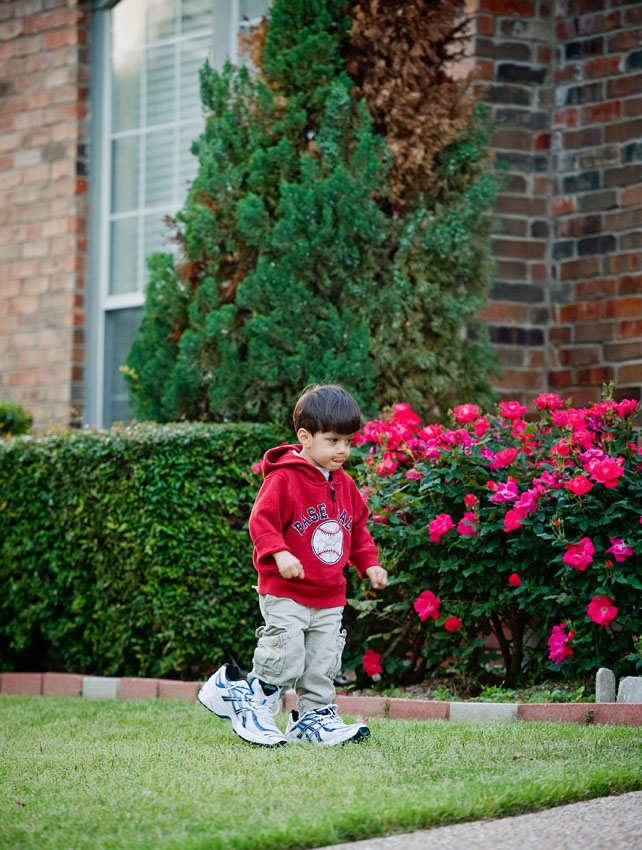 Determined to make them work 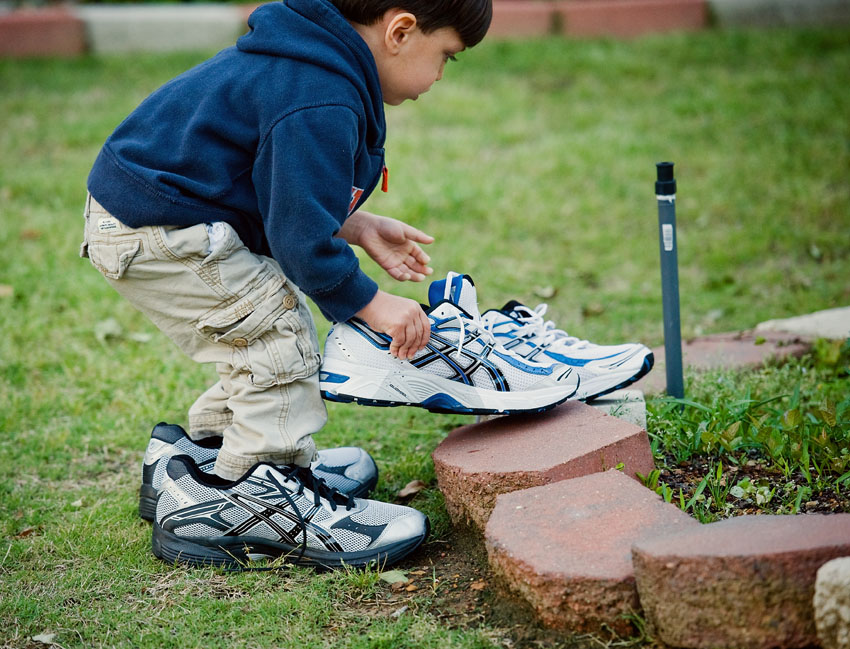 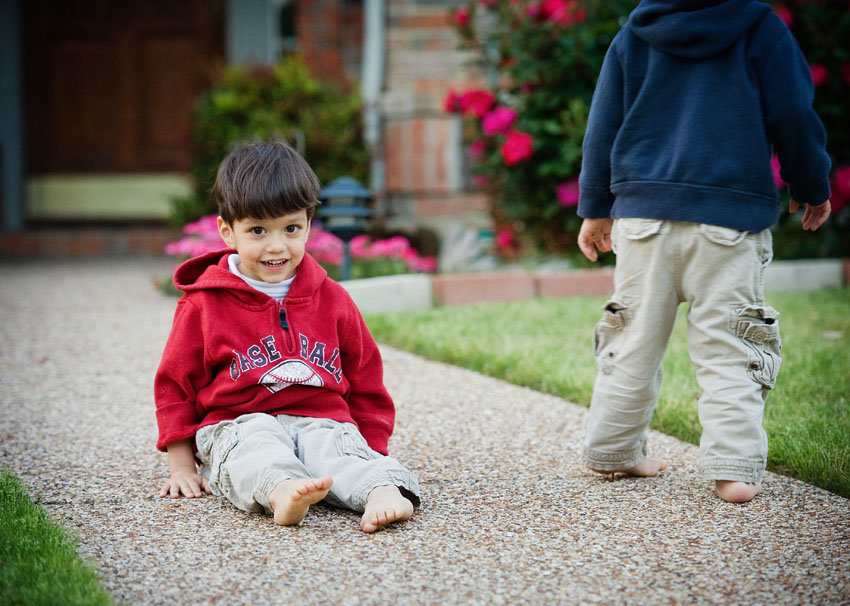 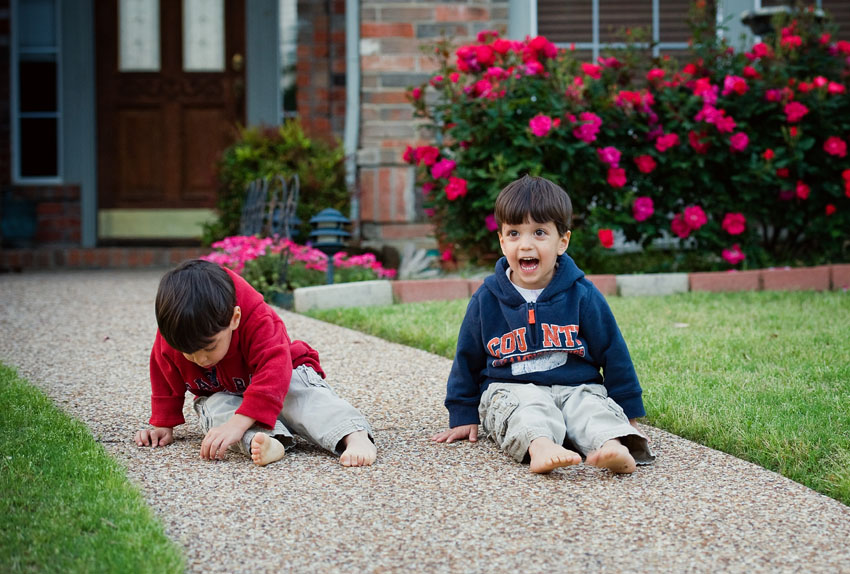 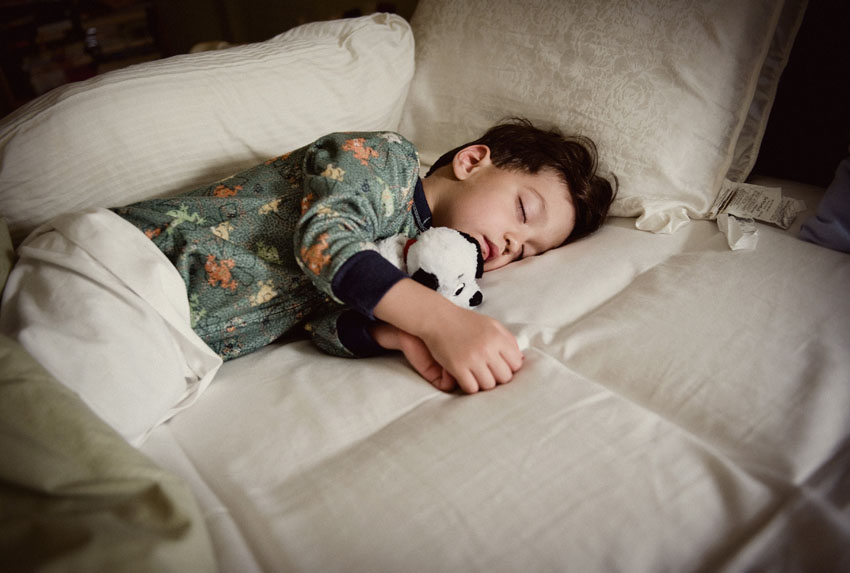 After over a year, he finally managed to get back into our bed

We went to the Orthopedist and there is some good news regarding Aiden’s arm. The latest x-rays looked good and it appears to be healing well. We no longer have to try to keep it immobilized (which was no longer very effective anyhow!). Aiden is very happy to have use of his arm again! On Tuesday he will go to the OR for the endoscopy, colonoscopy and manometry tests. It will be a long day for him but it will be good to finally have these tests done.

As far as the twins, basketball has become the latest craze (especially for Evan). He is quite good at dribbling it and wants to “own” the ball whenever he gets his hands on it. We are working with helping him learn how to share it

Below are a few recent images. Please keep Aiden in your prayers as this will be a big week for him! 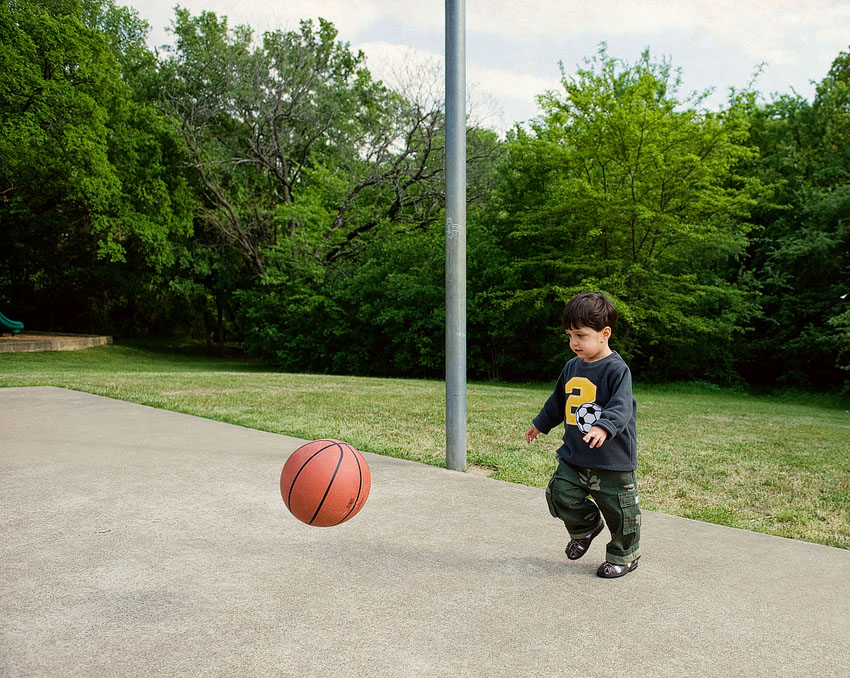 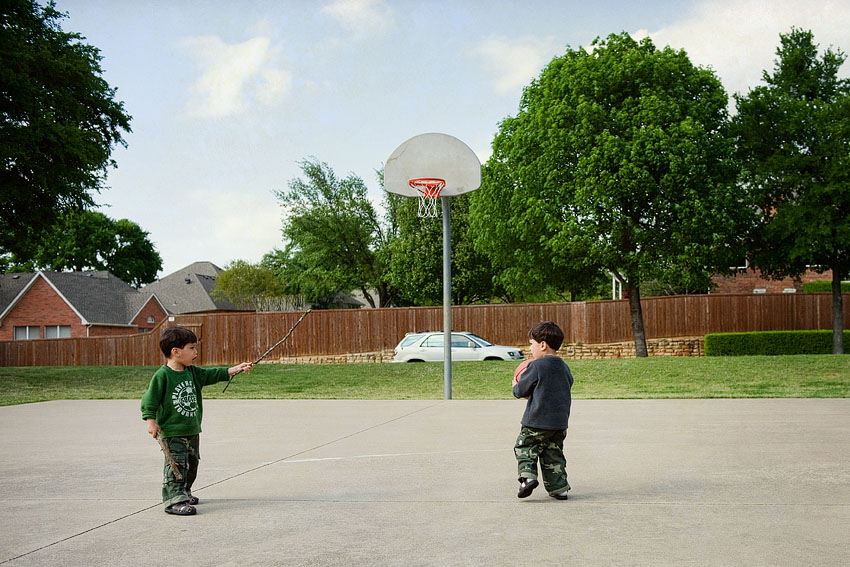 Ethan preferred to play with the sticks 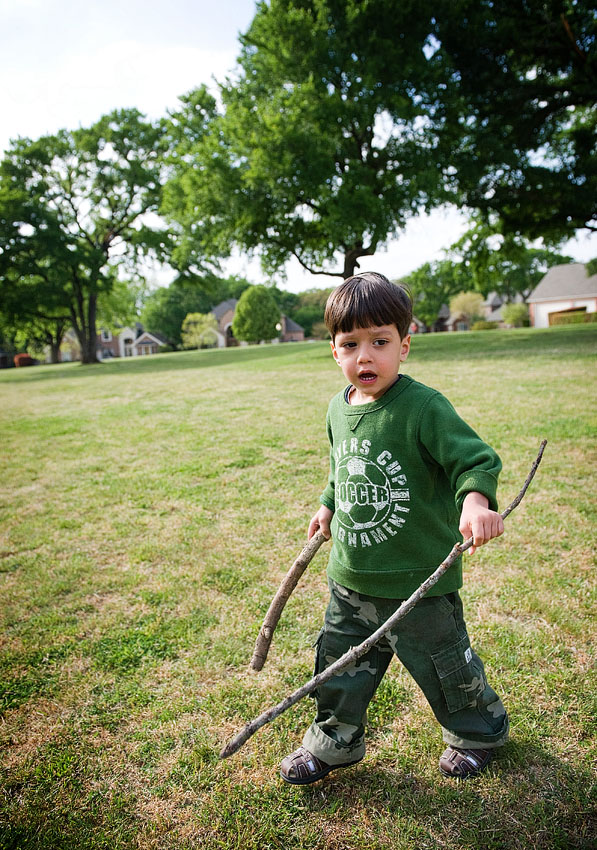 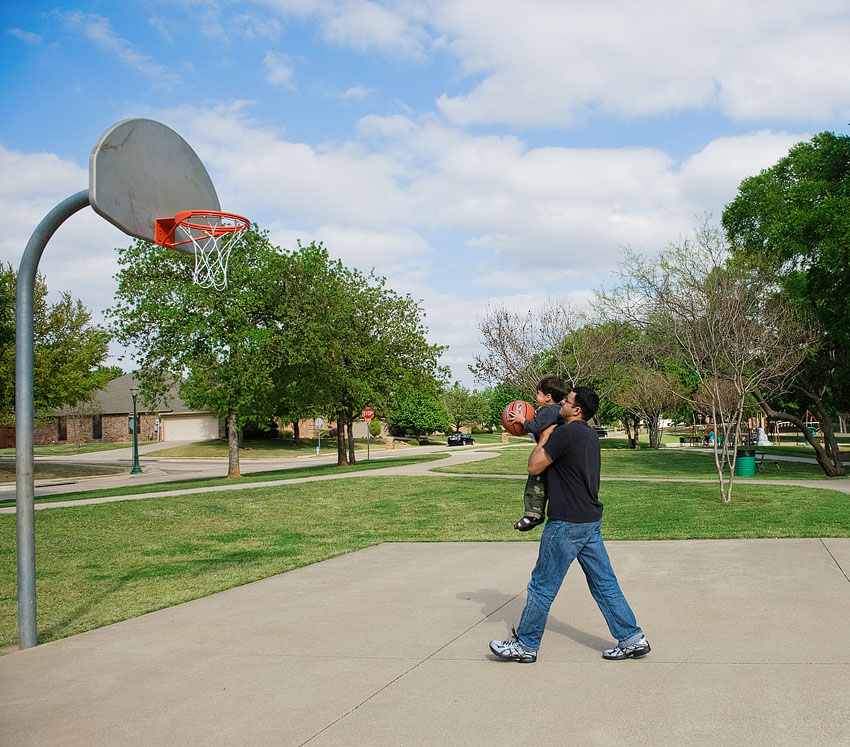 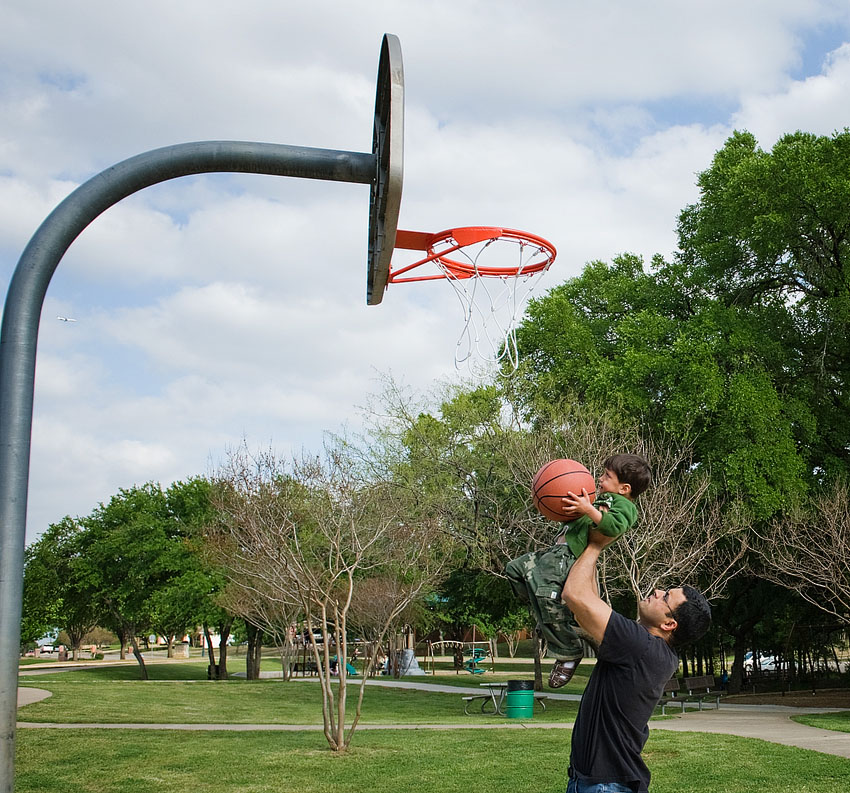 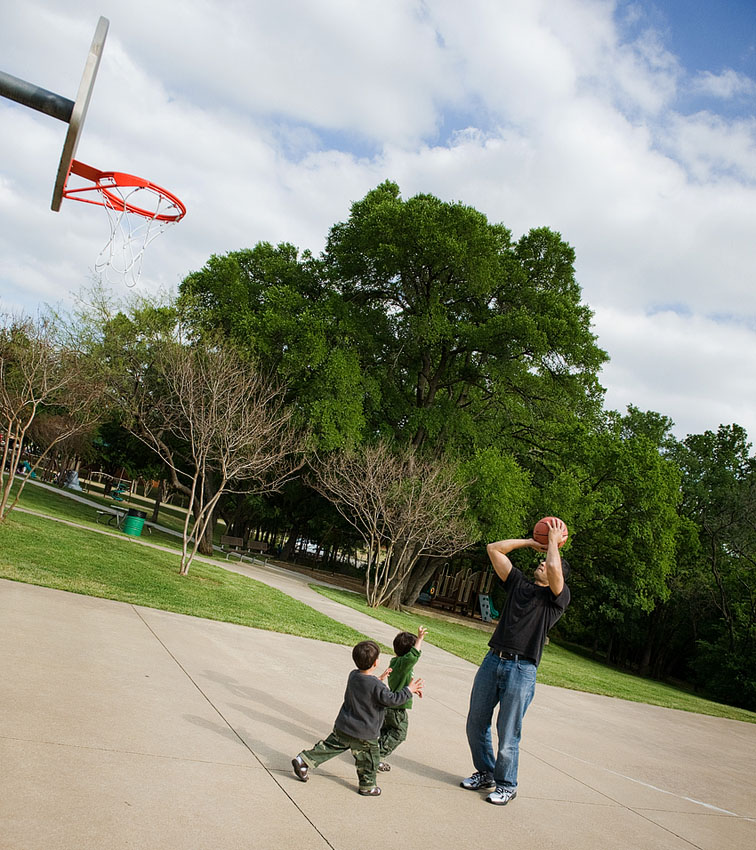 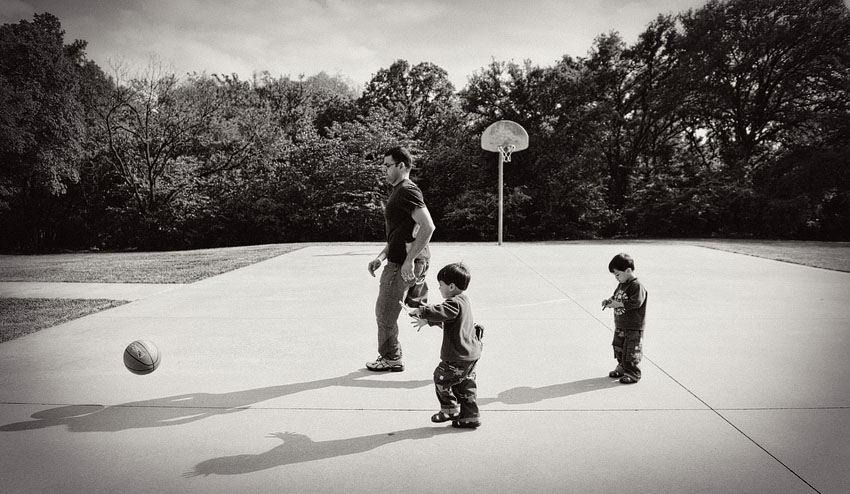 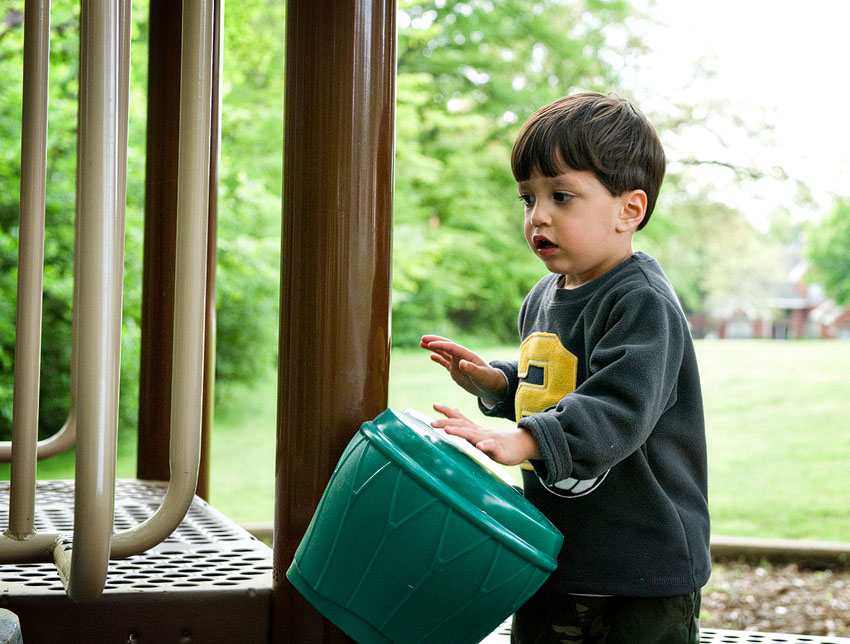 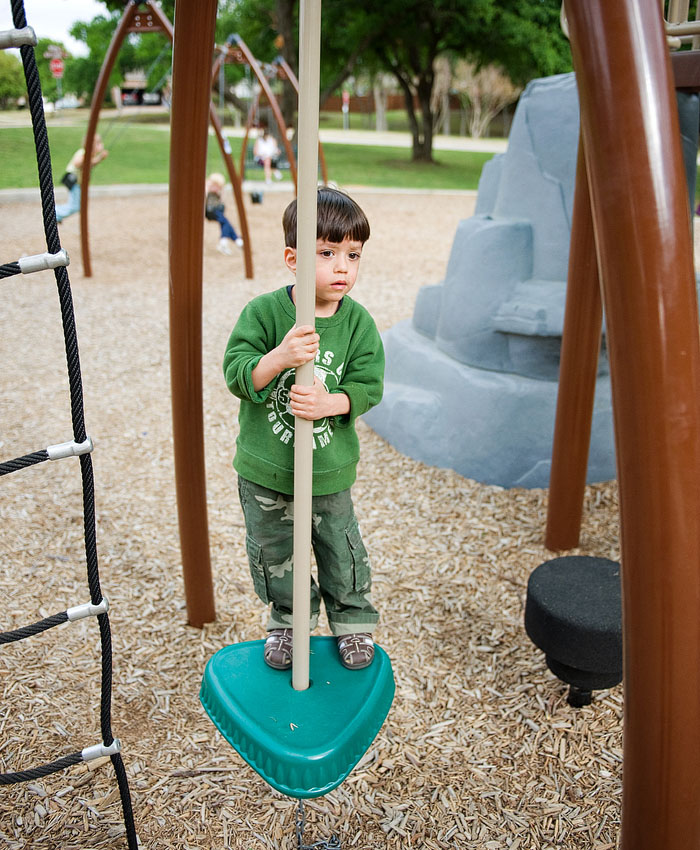 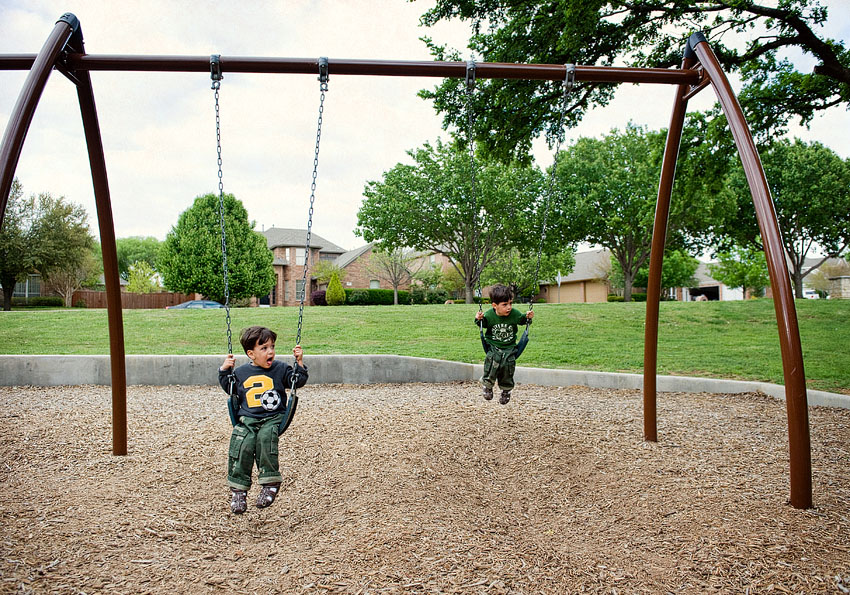 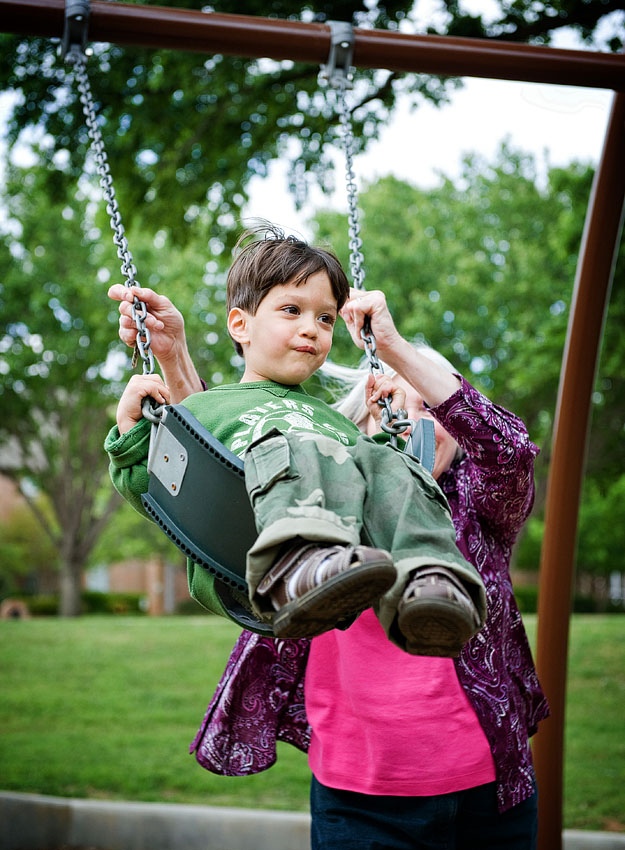 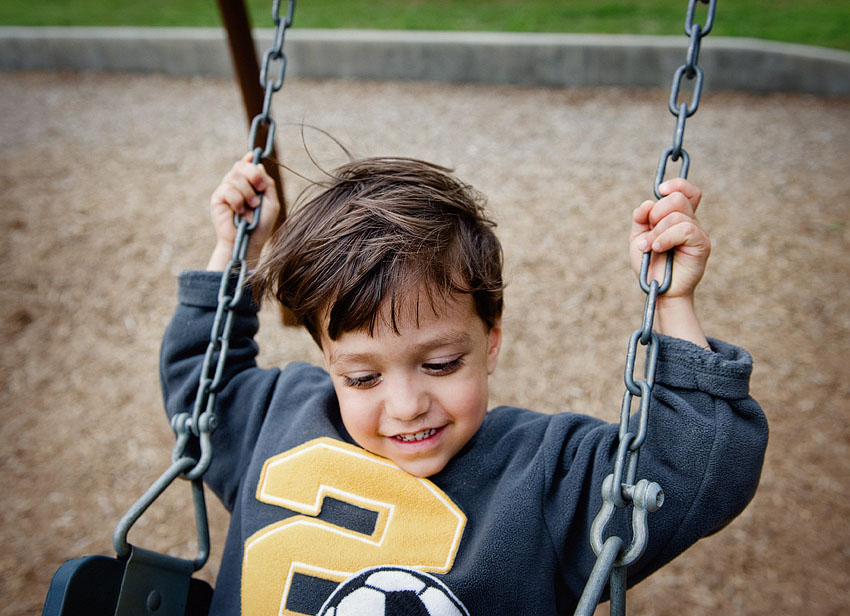 It has been a busy and hectic couple of weeks. Although Aiden is now outpatient, they have had to be back at the hospital nearly every day for something (follow-ups , dressing changes, x-rays, etc.). The j-tube site is now looking much better and is nearly healed, although there is still a bit of topical skin infection at the surgical site.

We finally have a specific date for the endoscopy, colonoscopy and (3 different types of) manometry testing. Provided we can wean him off of the pain meds by then, Aiden will go to the OR on April 20th for the scopes and placement of the manometry catheters. He will be inpatient for a couple of days while the testing is taking place, and to collect data.

He has already had MANY endoscopies, a partial colonoscopy, and two types of manometry testing previously; however, because of everything that has taken place in the past couple of months, the doctor want to repeat these tests in order to rule out certain diagnoses and obtain more information for comparison, to determine what has changed in Aiden’s body and tailor a more specific treatment plan for him. At this point, there is nothing else that they know to do to diagnose his issues. If these tests do not show something, they simply do not know what else to do for him at this point.

Because narcotics change the body’s motility and can skew the results of the testing, he must be completely off the pain meds prior to the tests. This is a huge challenge for his body and will have to take place in a fairly short period of time. He has been on strong pain meds such as morphine and oxycodone since early February, and is still in a significant amount of pain. In fact, he has yet to complain even once about the broken arm. Instead, he is constantly telling us that his “tummy hurts” (lower abdominal area), despite the fact that he is still on the pain meds. Please pray with us that the weaning of the pain meds will go well, with minimal withdrawal symptoms, and that the doctors will be able to find a way to adequately address the pain that Aiden continues to experience on a daily basis.

Due to the diagnosis and symptoms of pulmonary edema following the recent surgery and his continued long-term oxygen requirements, Aiden will also be undergoing some cardiac testing and follow-up in the next couple of weeks. Since his days in the NICU, despite his respiratory and other issues, he has always been very stable cardiac-wise. However, he has also never experienced pulmonary edema, and the doctors want to be cautious and rule out pulmonary hypertension, as well as any possible cardiac causes for these respiratory issues.

After discussing at length the possibility of using a capsule camera to try and diagnose the cause of Aiden’s pain and possible obstruction, the doctors have determined that he is still too small to attempt this procedure, as the camera could become lodged internally. To date, the smallest child they have performed this in is a 4-yr. old, and due to all of the various surgeries that Aiden has had in his lower abdominal area, there is also likely to be scar tissue that may interfere with the safe passage of the capsule camera.

After experiencing–and resolving–a number of issues with Aiden’s PICC line (which we were hoping to keep intact until after his next round of testing), it had to be pulled this past week when it developed a hole in the tubing. It will most likely have to be replaced when Aiden is taken to the OR in a couple of weeks.

The fractured humerus seems to be healing without any complications. Although the bone is ever so slightly displaced, they are hopeful that will correct itself due to his age, but have to monitor is closely as it heals. He will have another follow-up appointment and x-rays next week to continue to ensure that everything looks okay.

In the meantime, Aiden continues to be sad that his two comfort items and best friends, his blankie and his bear–both especially important when he is not feel good–have both gone missing in the past several weeks.

Although we have tried several replacement blankies, none are quite the same, and have yet to find anything similar to replace the beloved Mr. Bear.

The twins have been doing fine and enjoying “school” three times a week at the learning center at Church. They attend Tuesday through Thursday for 7 hours a day. Translation: 3 mornings and early afternoons of quiet, peace and bliss for Manish

(of course, he is at work but Hannah’s mom gets a nice break from the craziness).

Below is a video clip of the twins. (It is in HD so you will need a high speed connection to view it.)