The babies are officially 4 weeks old today. In some ways, it seems like it has been so much longer…still, it is hard to believe that much time has already passed.

Please continue to pray for Aiden. He is still on the CPAP vent. They are trying to gradually wean him down and eventually off the CPAP to breath completely on his own; however, it seems that each time they make changes to his vent settings, he has difficulty adjusting and consequently ends up back at a higher O2 rate then previously. Some days are better than others, but his lungs are still very weak and are not recovered, so he has to work very hard to breath even with the CPAP. He can’t stand the long prongs (they are very irritating) and so he pulls on them and tries to take them out, which hurts even more and makes him more upset. His brain scan showed that he still has a Level 2 bleed. They will repeat the scan next week to see if it has resolved by then. PLEASE PRAY that his brain bleed goes away and that is lungs heal quickly. The good news is, that he continues to gain weight and just reached 3 lbs!

Ethan and Evan are doing very well. Today they were officially moved to the South Hall of the NICU, which is the “feeders and growers” section. They are both still breathing very well on their own with the assistance of nasal canula, and are having fewer bradycardiac / apnea episodes. Their IVs and central lines have been removed, and they are growing so fast! Ethan now weighs 4 lbs., 3 ozs., and Evan — well, Evan is taking over! He has officially 5 lbs., 2 ozs. and is growing like a little weed. He has the cutest little chubby cheeks and double chin. They are both very alert when they are awake, looking all over and taking everything in and sometimes jabbering at us. Evan is very laid back and relaxed; it takes a lot to get him worked up. Ethan is very good, but he definitely has a mind of his own and knows what he wants. Their brain scans showed no brain bleeds!

Manish took a few new pictures of Ethan and Evan yesterday (see below — Aiden wasn’t having a very good day) and a new video clip. The video clip is posted under the “Pictures” section of the blog. 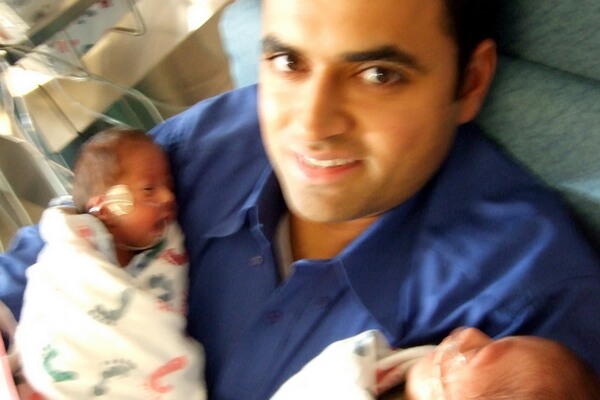 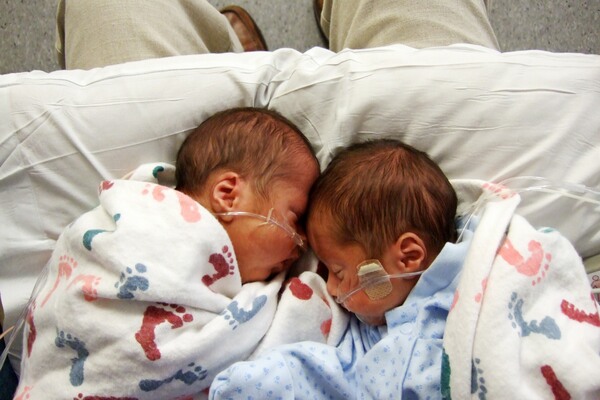 Ethan and Evan reunited for the first time since birth 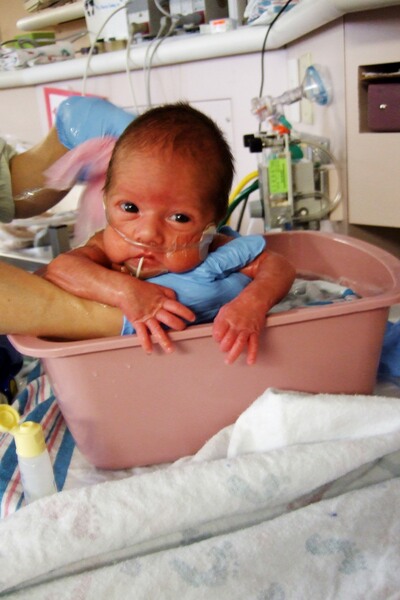